In the Name of God, the Most Compassionate, the Most Merciful

God will exalt those who believe among you, and those who have knowledge, to high ranks. God is well aware of what you do. (The Glorious Qur’an 58:11)

Praise be to God, with the guidance of the Qur’an and valuable instructions by the Prophet and Ahlul-Bayt (a), the Islamic community has had a phenomenal history in teaching and advancing different branches of science.
Having an exact understanding and rich knowledge of the available philosophical thoughts in the intellectual sciences, Muslims firstly, translated them into Arabic from their original languages. Secondly, with fairness and respect, they maintained the progress of these sciences by acknowledging what was plausible according to the standards of intellectual and philosophical arguments. They increased philosophical subjects quantitatively and qualitatively enhanced its depths and boundaries. With goodwill, they shared their knowledge generously.
Muslim scientists provided great services to mankind in other scientific areas from Algebra, Arithmetic and Astronomy to Chemistry, Physics, and Medicine. Not only did they not see science as against religion, but they enthusiastically and eagerly pursued the sciences and even established the foundation of some of them. They did so to comprehend the divine signs that God, the Almighty, has bestowed on the earth and in the heavens for humanity to benefit responsibly.
Muslim scholars, especially those from the schools of thought associated with the Ahlul-Bayt (a) strongly encouraged the learning of sciences outside the Islamic religious field; Islamic seminaries warmly welcomed and actually hosted the study of such sciences. Furthermore, the great Islamic scholars taught, researched and published scientific works in addition to Exegeses (Tafasir), Hadith Sciences, Islamic Jurisprudence and Philosophy.

An outstanding example of a scholar of our era is Allamah Seyyid Muhammad Husayn Tabataba’i. In addition to his piety, inner purity and his profound theosophical attainments, he was a prominent expert in various Islamic sciences and branches of other sciences. In addition to teaching and nurturing numerous students, most of whom became renowned scholars in the Islamic world, Allamah Tabataba’i has published highly valuable works in different areas of science. His priceless work, Al-Mizan fi Tafseer Al-Quran Al-Karim, (widely known as Tafseer Al-Mizan) has been praised by Ayatullah Motahhari in the following words: “It is the best exegesis of the Quran among Shias and Sunnis written since the early days of Islam”. For decades, his Bidayat al-Hikmah and Nihayat al-Hikmah have been part of the syllabus in Islamic seminaries and some universities. His valuable remarks and comments on important books such as Al-Asfar al-‘Aqliyyah al-Arba‘ah, Bihar al-Anwar, Mirat al-‘Uqool, Al-Kafi and Kifayat al-Usool demonstrate his encyclopaedic knowledge.
While I would like to extend my deepest respects to the souls of all pious scholars and guides to salvation and seek the help of God, the Omnipotent, the Most Perfect Teacher that chose His most truthful servants to guide and nurture humanity, on the auspicious occasion of the birth anniversary of the Lady Fatimah Zahra (S.A), I officially announce the commencement of the Allamah Tabataba’i Awards (AT Awards) in England.

The objectives envisaged of the AT Awards is to foster progress toward a cultural-scientific movement in the future. They are as follows:

I humbly ask God, the Most Exalted, to shower His blessings on this newly planted sapling from His unlimited sources of knowledge (ma‘rifah) and wisdom (hikmah) and make it a “blessed tree which has firm roots and its branches rise up into the sky. It gives its fruit every season by the leave of its Lord” (14:24 & 25).

AT Award in the News 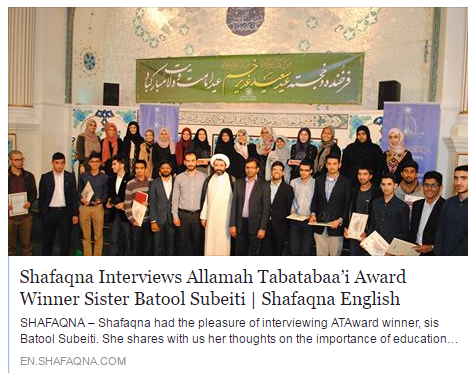 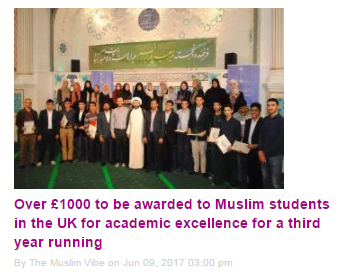 Registration for 2019 is now closed

Deadline for Registration: 1st of August 2019